Before I get started, no comments about the awesome Relient K videos? Seriously? People get comments when they simply complain about the weather outside (granted, for those of us in Utah, we've had plenty to complain about the last few weeks -- now I know what it feels like to live in Seattle). I guess my posts or so descriptive and thorough that no one else really has much to say.

Anyway, in what has become quite the tradition in our family (family, friends, neighbors, friends' kids, neighbors' kids, etc. all fall within that category), we went to the Bees game last night at Spring Mobile Park (formerly known as Franklin Covey Field). It was a grand old time. Literally. Brandon Wood blasted a grand slam. We were all pretty stoked about that. But the excitement didn't end there.

Later, with a man on third, the Bees went with the squeeze play. You don't see the squeeze play used that much in baseball these days so it was great to see the guy essentially steal home while the pitcher and catcher were scrambling for the ball. Of course, even more exciting was the fact that the squeeze play bunt turned into an in-the-park homerun (albeit scored a triple and an error). I don't think I've ever witnessed a bunted homerun (at least not since I played little league). It was fantastic. The weather was beautiful and we had a great night. 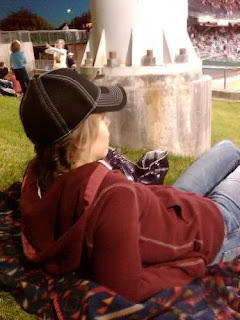 As you can tell, we were sitting on the berm in right field. Several members of our ward were with us, including the Moores, the Buxtons, the Joneses, and the Harrises. Great night for baseball.
Added By: Tyson No comments:

Relient K and Owl City with the Whites and the Platts

So, about a month or so ago, I got an email from Aaron White (a neighbor and friend). He noticed that my Facebook profile included a reference to Relient K as a favorite band. Unbeknownst to me, Relient K was coming in concert and Aaron wanted to know if I was interested in going with him and two of his boys, Weston and Jackson. It was a no-brainer. The concert was Thursday, June 4th, at the Murray Theater. It was fantastic. Lance Platt and his daughters came too. Lance, Aaron, and I may have been the three oldest guys there. But hey, good music is good music right? It's not like you get that many chances to see Relient K live after all. Check out the videos of the White boys rocking out.


I also have a video of me and Jax in the mosh pit but, as you can guess, it is a little shaky. Besides, I'm not sure that Laurie would appreciate knowing that I took her little boy into the mosh pit (it was it his request, I promise!). Good times were had by all.

Owl City, one of the opening bands, is really good. Sara has been listening to them all weekend. There is an excellent review / description of them in the Deseret News:

If your household appliances wrote love songs while you were away on vacation, their cheerful blips and bleeps would pour out the windows, sweep through the neighborhood like candy-coated tidal waves, and you would return home to find crowds of people standing on your lawn, clapping and singing along to the happiest pop melodies imaginable. Welcome to Owl City. Based in Owatonna, Minnesota, Owl City features the music of Adam Young.

You should definitely check them out at http://www.myspace.com/owlcity. To keep the concert theme going for the weekend, Sara and I took my cousin, Zac, to the Ryan Shupe concert at the Sandy Amphitheater last night (Friday). The weather looked a little sketchy but it all turned out well. I'll post pics and videos when I get a chance.
Added By: Tyson 2 comments: