All Hallows' Even Eve

As I scanned the new Facebook "News Feed" and "Live Feed" (what's up with that by the way), I came across a bunch of pictures from current BYU Law students and their kids celebrating Halloween. One of the better traditions at the law school is to have all the law students' kids (and when you're talking about BYU Law, there are a lot of kids) come in and go trick-or-treating at the carrels. It is awesome.

I haven't been able to dig up any of the pictures from when I was in law school but I have something better. Thomas Rex Lee, or Professor Lee, has a resume that is the envy of nearly everyone. He is one of the country's foremost authorities on trademark law and trademark infringement. He was a Deputy Assistant Attorney General for the United States. And he does a pretty good imitation of Wayne from Wayne's World: 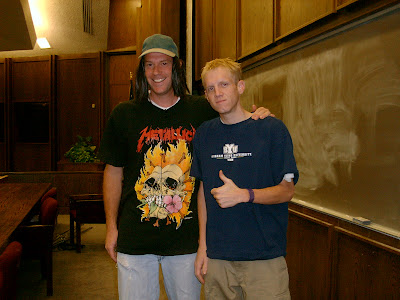 That picture is classic. We were 1Ls in Lee's Civil Procedure class. I knew he was going to be a good professor when he showed up dressed for Halloween. It seems like 2002 wasn't really that long ago. Of course, I look like I'm about 17 in that picture, so it might as well have been 1995 (and yes, I still have and regularly wear that BYU shirt). The last seven years have gone by quickly. I bet Professor Lee's foosball skills are lacking (he was quite adept at scoring in the goal he was supposed to be defending).
Added By: Tyson No comments:

My cousin Blake tipped me off to this video (via Facebook). I've seen lots of Transformer costumes for Halloween but I've never seen one that actually does transform. Awesome!

I think the best comment regarding this YouTube flick is: "I hope they make a costume that transforms into Megan Fox too." Funny. And I'm sure there are plenty of costumes out there that will transform you into a bad actress so do we really need another one?
Added By: Tyson No comments:

I Too Love the Utah Jazz Bear

The Utah Jazz Bear (or the Jazz Bear as everyone in Utah knows him) is often spotted driving around downtown Salt Lake on his Harley. He has perfected sledding down the steep stairs at EnergySolutions Arena and can always be found doing all sorts of sketchy stuff during breaks of Jazz home games.

Travis Pastrana, the boy wonder, has X-Games gold medals in motorcross, freestyle motorcross, and rally racing. Like me, Travis drives a Subaru WRX STI (although his might be a little more tricked out than mine). Travis also has an MTV show called "Nitro Circus" that features Travis and his friends traveling around the world performing reckless and adrenaline filled stunts. So what happens when Nitro Circus makes a stop in Utah? The Jazz Bear shows up:

Now that is good stuff. Yes Travis, we too love the Utah Jazz Bear. Now someone needs to get the Travis, the Jazz Bear, D. Will, and Kyle Korver together for a dodgeball match.
Added By: Tyson No comments:

You have probably heard (if you haven't, shame on you) that my Mom won a 2009 Women's Tech Council award for being a Technology Trailblazer. The awards ceremony was at the Grand America in Salt Lake City. Brant and Jordann joined me, Sara, my Dad, and, of course, my Mom. One of the side benefits was that one of my clients (one of my big clients) was a sponsor of the event and the awards; while my legal work may not be up to par, at least they are well aware of the fact that I come from "good stock."

SALT LAKE CITY, Sept. 24, 2009 — Sixteen women were recognized at the second annual Women Tech Awards Ceremony, presented by Women Tech Council and MountainWest Capital Network, which recognizes technology-focused women who are driving innovation, leading technology companies, and are key contributors to the community. The sold out event was emceed by Shauna Lake of KUTV 2 news Marguerite Hancock, Associate Director of Stanford Program on Regions of Innovation and Entrepreneurship, keynoted the event

"Recognizing these women also gives us an opportunity to honor the great companies that foster their careers," said Cydni Tetro, Executive Director, Women Tech Council and CMO at FamilyLink. "We were overwhelmed by the support these companies made to their finalists."

And here is a slideshow with some pictures from the event. The lighting in the Grand America isn't fantastic (at least when you are taking pictures with a point-and-shoot camera and a cell phone) but here you are anyway:

So I hear that getting a Google Wave invite is a big deal. Apparently, a really big deal. Apparently, the biggest deal since Gmail accounts were selling for ridiculous amounts on eBay. I would have sold my early Gmail invites on eBay (they were very early -- very very early) but that was against the Terms of Service. Of course, it is against Google Wave's Terms of Service to sell invitations (I assume) but that hasn't stopped the entrepreneurs among us: Current eBay Prices for Google Wave Invitations.

Seriously though. Are people really paying more than $50 a pop for a simple Wave invite? If you are really that hard up, get in touch with me and we'll see what we can work out ;-)

I am surprised by the land-grab on Google Wave. It doesn't make much sense to me. Your Google Wave account will be based on your Google Account (which is generally your Gmail username). Since you already have your username, why do you "need" to get into Wave before everyone else? It is not like someone is going to take a name that you are hoping for. So put the $50 back in your wallet (or send it to me) and have a little patience.

After seeing President Monson's jar of warm fuzzies earlier today, I figured that I should give my Mom and Dad some warm fuzzies of their own. As always, just click on the pictures / slideshow to go to a page where you can comment on the clowns (Boy, Cody, Jord, Rich, Tyson, and Zac) appearing in these pictures (John isn't a clown -- the Ph.D. gives him some semblance of credibility).

I have some more pictures that need posting. But smells of freshly baked banana bread or wafting up from the kitchen to the office. I guess you will all have to wait for the next round of pictures.
Added By: Tyson 2 comments:

[Editorial Note]: I'm bringing a story back. That's right. Straight from the archives. This story was originally published on this very blog in October 2008. The title is/was: Midnight Sun - Stephanie Meyer's Rewrite of Twilight - Manuscript Leaked and you can click [here] to read the original.

Why am I bringing it back? Because we keep getting comments from people who think we are Stephanie Meyers! It is awesome. There is nothing better than comments from teenage girls with vampire and werewolf fanaticism. Check them out! A new one was added in the last day or two! Don't get me wrong; at least 50% of those living in our house love Twilight, New Moon, Eclipse, and Breaking Dawn. For at least one of us, the best part of Transformers 2 was the New Moon trailer before the movie even started. But with New Moon coming out in theatrical form and no word from Stephanie about the status of Midnight Sun, I figured it was time to invite additional comments.

(Note to Stephanie Meyer's publishers and their attorneys -- we too (two) are attorneys. Yes. Both of us. I've got three words for you: Fair Use / Parody. Save it for the judge).

Sara stumbled across the linked manuscript of Midnight Sun (the rewrite of Twilight told from Edward's (the vampire) point of view). Evidently Meyer distributed copies of the unfinished and unedited manuscripts to some family members and friends who then posted it on the net. Meyer has since decided that she is not going to complete the book and she has posted a link to the unfinished manuscript on her site. Here is a link to the press release on her website and a quick summary of the posting:

I have a good idea of how the leak happened as there were very few copies of Midnight Sun that left my possession and each was unique. Due to little changes I made to the manuscript at different times, I can tell when each left my possession and to whom it was given. The manuscript that was illegally distributed on the Internet was given to trusted individuals for a good purpose. I have no comment beyond that as I believe that there was no malicious intent with the initial distribution.

I do want to take a moment and thank the wonderful fans who have been so supportive of me over the past three years. I cannot begin to tell you how much each of you means to me. I only hope this note will stop all the confusion and online speculation so that the Twilight universe can once again become the happy escape it used to be. After this incredibly busy year, I am now focusing on spending more time with my family and working on some other writing projects.

Links to the manuscript can be found on Meyer's website (the link above). Looks like Sara will have something to read for the next couple of days.
Added By: Tyson No comments: