Dear Max Hall - All Is Forgiven!

It is so nice to be on the winning side of the Holy War. I love the stuff that is coming out. It seems like every other email I get has a great picture or video included. Here is another one for your viewing pleasure.

It's true. It is all true. Especially the part about Gordon Monson (in my opinion at least). I'll tell you what. I can get used to a year of this. Thank you Andrew George!

As BYU fans, we've been starved for the last 365 days. Finally, we have the opportunity to let our creative sides come out in gentle mockery of our friends who happen to be Ute fans:

The Most Wonderful Time of the Year...

Quick installment tonight. We are in the process of setting up Christmas and it is fun. I love Christmas. I really love Christmas lights. We have several new additions to our light parade this year. I don't have an excellent video yet but I wanted to give everyone a quick taste, so here you go:

Notice the awesome snowman on the porch (a birthday present to me from Sara's parents). Then we've got the candy-cane sticks that actually glow red (it is hard to see them because it was still light outside when I took the video) and the cool snowflakes that have all sorts of different patterns and display settings. Of course, we have icicle lights all over the house as usual. We'll be sure to post more of our awesome Christmas decorations as we polish them off.

For the first time this year, our porch was graced with competing flags. Our neighbors across the street, the Wrights, have been stalwart BYU-flag fliers all year. Admittedly, I missed a couple of early weeks but, after several other neighbors asked me where the BYU flag went, I've been more diligent. I got my flag out bright and early today. Then, when I wasn't looking, Sara got her flag out too (it was classic because Kyle Wright, our neighbor across the street, got his flag out while Sara wasn't looking, which frustrated her because I think she was hoping that they might have forgotten): 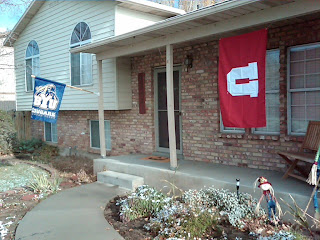 Note that Sara's flag is much bigger than mine. Anyway, there are a lot of split families and friends when it comes to the BYU / Utah rivalry. Prior to getting geared up for the next two weeks of rival bashing, Doug Robinson, from the Deseret News, was trying to answer a preliminary question: Can BYU football fans root for (ick) Utah Utes?

The answer is, of course, yes. But not very often. But that is beside the point. Robinson's column is focused on whether it was okay to root for Utah over TCU (it is moot now since TCU rolled Utah just like TCU rolled BYU). I say yes; if Utah beat TCU then BYU would win the MWC championship (because, of course, BYU will beat Utah). In setting up this question, Robinson penned the following, which I found to be hilarious:

The question you face is this: For whom do you cheer — TCU or (ahem, ahem, gag, cough, spit) Utah?

Who do you like this weekend — the Frogs or your dreaded, detested, sick-of-'em Utes?

For BYU Fan, this is a difficult weekend. It must be like choosing between Nancy Pelosi or Harry Reid, Michael Moore or the swine flu, the firing squad or hanging, the BCS or the ACLU.

One of the three biggest lies in Utah County is about to be put to the test:

The second lie: I'm not going to get married until I finish school.

The third lie: I cheer for the Utes when they're not playing BYU.

Good stuff Mr. Robinson. Good stuff indeed. And just so you know: (1) I don't vote for the party, I vote against Curt Bramble; (2) I didn't get married until I finished school, twice; and (3) Ummmm... 5th Amendment please.

If you've been around since June, you probably remember a post about me going to the Relient K concert with some of the neighborhood kids (and their parents of course). Sara will tell you that the best thing to come out of that experience was the discovery of Owl City; nobody had ever heard of Owl City at that point (side note: my mom really likes Owl City too).

But Relient K was awesome. And hanging out with the Whites and the Platts was also awesome. Fast forward about six months and we're gearing up to do it again. Aaron is making the arrangements and it sounds like Aaron, Weston, Jackson, and myself are headed to Vegas on December 18th for the Winter Wonder Slam featuring TobyMac and Relient K.

There is nothing quite like a good Christian Rock concert to get you in the mood for a Rockin' Christmas. Here is the official Winter Wonder Slam 2009 Tour Widget; you can use it to check out some of the music and learn about some of the bands:

If nothing else, you need to listen to Relient K's version of Sleigh Ride. Just click on "Music" and then pick the Relient K song. Turn up the music, wish for some snow, and get ready for winter!

I know that we're still right in the middle of college football madness but BYU Basketball deserves some exposure for some of the recent promos that they have put together.

First, the official spot, which you can find on Comcast, Dish, and various other cable networks:

I too am a Cougar. But, no one epitomizes being a Cougar better than the two biggest BYU basketball fans, Ronnie Ron and Roscoe. If you don't know about Ronnie Ron and Roscoe, I'll catch you up. "Ronnie Ron & Roscoe are going to be walking you through the 2009-2010 BYU Men's Basketball Season. Respect your elders and show up to the game." That according to the BYU Hoops / BYU Basketball channel on Vimeo. You should subscribe to the channel (like me). But, if you're unsure, here are the first three Ronnie Ron & Roscoe spots; you will be quickly convinced I'm sure:

I'll be looking for all of you at that place "where the magic happens." There is something special about being in the Marriott Center as winter weather rolls in. Kind of like snow on Christmas; it just feels right.

Soccer. It isn't a gentleman's game. If you haven't heard about New Mexico's Elizabeth Lambert yet, shame on you. Ms. Lambert, a defender on the Lobo's women's soccer team, apparently doesn't like to get completely worked on the soccer field. You see, when Lambert (#15) continually got beat by BYU's Carlee Payne, a 5'4" freshmen (#7), she got a little frustrated. Well, a lot frustrated. I'll let the good folks at ESPN do some of the explaining:

I bet you never thought you would hear John Anderson doing BYU Women's Soccer highlights did you? So, after Payne scores the first goal of the game, Lambert-the-Enforcer decides that she has had enough soccer and it is time for some hockey. She then commits fouls that would have earned her a ten-minute major if she had been on ice. But soccer being soccer and officials being blind, Lambert-the-Thug ends up with nothing more than a yellow card. A yellow card!?! Yes, soccer can be physical. Yes, Payne was pushing and shoving too. But pushing and shoving is a part of soccer (as is taking dives and faking injuries). Pulling ponytails, kicking balls at peoples heads while they are on the ground, and punching people in the face are not part of the game of soccer (although, they are permitted in the stands, assuming you are in Europe).

Anyway, I was furious when I saw that. But then I saw this (and I felt much better -- much much better -- in fact, it made me extremely proud to be a BYU fan and even more proud that I could share these great clips with you and the rest of the world):

Watch it again. Notice on the wide shot where Lambert-the-Destroyer takes Carlee Payne down (again). Payne pops back up, shakes her head, has a huge smile on her face, and starts walking back down field. Lambert steps up to talk some more trash. And what does Payne do? The most devastating move in all of sports. It's true. No trash-talking, dance, taunting, screaming, yelling, fighting, complaining, can compare with the silent-but-deadly, non-chalant, point to the scoreboard.